Researchers estimate two million LGBTQ people are interested in adopting.  One in five foster youth identify as LGBTQ.  Faith-based discrimination harms our community as well as many others. Three LGBTQ members of Congress – Katie Hill, Sean Patrick Maloney, and Angie Craig  – are asking their colleagues to sign a letter to the U.S. Department of Health and Human Services (HHS) demanding that they uphold protections that ensure that every child has a loving home.  Urge your Representative to sign the letter telling the administration to stop sanctioning discrimination in adoptions and foster care. 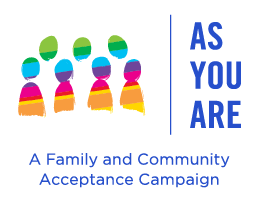 Advancing Acceptance:  The Movement Advancement Project (MAP), the Biden Foundation, and Gender Spectrum have teamed up to launch a new campaign called “Advancing Acceptance” to raise awareness of the importance of family and community acceptance in the lives of transgender and gender diverse youth.

The campaign encourages supporters of transgender and gender diverse youth—from LGBTQ youth, parents, siblings, educators, social service providers, coaches, and others—to share their stories, which will be included as part of the Biden Foundation's “As You Are” campaign. These stories will help highlight the critical importance of affirming, accepting, and supporting LGBTQ young people. Share your story of acceptance and support of a trans or a gender diverse youth!

No More Government Shut-Downs:  The 35-day federal government shutdown caused disruptions in the lives of millions of people.  At least 13,600 federal workers identify as LGBTQ, which means thousands of people from our community were furloughed.

Fortunately, our LGBTQ community centers were there to help. In California, the Imperial Valley LGBT Resource Center offered space for families affected by the shutdown to hold a rummage sale.  In Virginia, volunteers from Diversity Richmond and the local chapter of the Metropolitan Community Church set up and staffed a warehouse filled with food and basic hygiene items, available free of charge to government employees not receiving paychecks. And in Texas, the Waterloo Counseling Center offered services free of charge to anyone on furlough.

We saw our community through a difficult time, but the threat of another shutdown is very real unless federal elected officials can negotiate an agreement by February 15th.  Let's make it clear to our elected officials that shutdowns are not acceptable. We've written a letter for you to sign and send. Click here to send letters to your lawmakers.