Copy and paste into an email/newsletter :

Did you know that fifty percent of LGBTQ+ people live in the 29 states that lack comprehensive statewide laws explicitly prohibiting discrimination against LGBTQ+ people?  While 21 states and over 350 cities have passed LGBTQ+ nondiscrimination protections, this patchwork of protections is unsustainable and leaves too many people behind.

That's why it's so important that Congress passes the Equality Act.  Introduced into Congress on February 18th, 2021, the Equality Act is bipartisan legislation that would update federal law to include express and enduring nondiscrimination protections for 13 million LGBTQ+ Americans across virtually every area of daily life.

The nonpartisan Public Religion Research Institute recently found that national support for the Equality Act is around 83 percent. This is the strongest level of support the bill has ever seen.

The House has already passed the Equality Act.  Now we must tell our Senators to support this critical legislation.

Take action today by contacting your Senator by email or phone.  It's so simple - just a few clicks will get it done.  You can even record a 30-second video!

Graphics to use with this action alert : 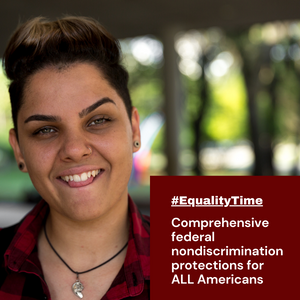 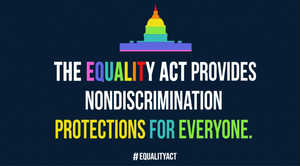