Andi's Story: I Am In My 80's And Still Fighting For Equality

Andi came out when her son was only four months old. She was seventeen at the time. She knew she was not attracted to men and let her son’s father know she had to pursue a different path. She dated several women before meeting her first true female love, Skid at age 19. Andi and Skid were together for 36 years, and when Skid passed away Andi was left alone and without a place to call home. She began visiting the Los Angeles LGBT Center and became a regular at one of their lesbian support groups. It was there that she met Nancy. After several years of getting to know each other, Andi and Nancy started a relationship and are still together today. Both currently reside at Triangle Square, the Center’s low income LGBT friendly senior housing facility. 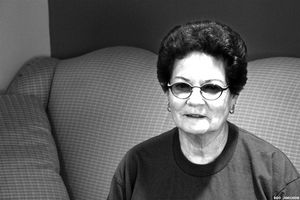 Andi and Nancy love to take walks, try new restaurants, explore Hollywood, and enjoy the many activities offered by the Los Angeles LGBT Center. They both remain active in political causes marching at rallies, sending postcards and letters to their State representatives, and joining the Center’s “Senior Resistance Squad”; making phone calls all over the country in support of LGBT-friendly laws and protections. Andi and Nancy have been featured in films, books, and articles about the challenges older LGBT generations face. Andi feels it is important to continue to fight for equality, especially with the majority of the Trump administration not being LGBT-friendly.

Despite some serious ongoing health issues, Andi maintains an optimistic view. She is proud of her wonderful son and her rich, full life. Andi says, "My life is still going on and I'm doing the best I can to accomplish what I can with the time I have left.”