Curtis Lipscomb on Leadership in the Black LGBT Community

Curtis Lipscomb is the Executive Director of LGBT Detroit and the Founder of Hotter Than July, Detroit’s Annual Black Gay Pride Celebration

LGBT Detroit is a Detroit based nonprofit organization whose mission is to increase awareness of and support to Detroit's dynamic LGBT culture through education and advocacy with integrity and pride. The safe space we have deliberately designed is quite unique in America.

My Path to Self-Discovery

My journey to leadership in LGBT Community in Detroit began in my youth. I have been blessed to come out in 1980 when I was only 15. I was extremely blessed to be supported by a community made up of people who supported me in my truth. Humorously, I came out to my 9th grade English teacher at Cass Technical High School, through a journal entry.

In 1980, there was a lot of social change happening. I came from a very unique and unusual situation, and because of the support of extended family, I didn’t try to kill myself, or do drugs upon self discovery. All throughout my high school years I was never bullied, harassed, or beaten up. I was free and encouraged to pursue a dream of being a fashion designer.. My high school years were wonderful. My school mates from Cass Tech allowed me to be me. We are still friends to this day and our 35th Reunion occurs later this year.

I came from a single-parent household, so if I wanted or needed to purchase something for myself, I had to work to get the money. My first real job was as an assistant to a Black, gay man named David Eric who had a fashion design studio on Livernois and Outer Drive in Detroit, in an area still known as “The Avenue of Fashion.” Mr. Eric knew what his customers wanted, but he couldn’t illustrate, so I was his artist. My boss treated me respectfully and I was paid to do something I loved to do and was very good at doing.

Although still a teenager, I was encouraged to go to a party with “older” gay men who were about 20-21 years old (When you’re 15, 20 years old IS “older”!) The party was hosted by Alan Meyers, the brother of Alicia Meyers who had a national hit recording out at the time. Attending this party was another turning point in my young life. Although I had already come out and was comfortable with my sexual identity, at that party I saw COMMUNITY! Sophisticated, well-dressed, people (Black, straight, gay, lesbian, bi transgender and others) were in attendance. I said to myself: “Oh my God! THIS is it! This is home!” That is when I realized that I properly fit in somewhere.

Although most black and brown people do not want to be separated from family, many are shunned away. I didn’t know it then, but now I realize that I stand on the shoulders of people who made it safe for me to come out in 1980. I stand on the shoulders of our warriors like Bayard Rustin, Langston Hughes, and Ruth Ellis, among many others. Rustin begat my boss and my boss begat me.

Growing up in Detroit, I didn’t really realize that I was BLACK. It was not until I left Detroit and moved to New York City to attend Parsons "The New School of Design" that race became an issue. While there, I was described as a Black boy from “troubled” Chicago with a knife in my back pocket. I didn’t have a struggle with my gay identity, but my Blackness became problematic. For the first time in my life, I was in the minority. I was one of only five Black people in my class. My sexual identity may not always been obvious, but I was often reminded of my Blackness.

This was about 1983 and it was the beginning of the AIDS crisis. As I recall, the epidemic hit the Broadway community first, and then the fashion community down the street. There was a known death every weekend. In the early 1980s, the bar was our “CNN,” where LGBT community news was delivered. The news at that time was “who’s sick and who’s not.” There was always a status update at the bar. We watched, helpless, as people shrunk and died in droves. I saw and experienced many of my industry heroes die right in front of me. Being gay took on a new paradigm; now we were looked at as a disease-carrying people. 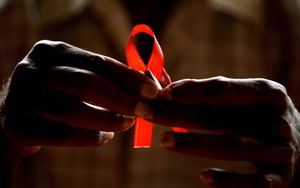 Eventually, my best friend from Detroit, Robert Penick III, came to New York to attend the Fashion Institute of Technology. I perceived that Robert had a good life back home. He was the apple of his mother’s eye and anything he needed and wanted, she would provide. He was also comfortable with his gay identity.

We became roommates, and having Robert in New York with me made living in the Big Apple more bearable; that is until Robert found out he may have been infected. Sadly, he was positively diagnosed. I saw my best friend wither away and ultimately, die in my arms. Robert made his transition in May of 1992. He was only 27 years old. His death has and continue to traumatized me.

I had lived in New York for about ten years by now, but after Robert died, I knew unconsciously that I did not want anybody to have his horrible experience. So I left New York because I did not feel safe. Many of us were walking in a trance. There was no significant support for us. The only support group available at the time was not particularly supportive of Black, gay men.

A Community Organizer in Detroit

My salvation came when I met James Drain who later became my boyfriend and introduced me to a support group specifically for Black, gay men. We met every Tuesday night in the basement St. Matthew and St. Joseph church on Woodward.

That was my saving space. It was called Men of Color Motivational Group (MOC). There were lots of different activities, but every Tuesday night, that’s where we were. But the deaths continued, including my boyfriend James Drain.

The AIDS holocaust did not stop. It was happening in New York and also here at home in Detroit. Grown men became sick and wards of the state. If you didn’t have resources, you were in trouble.

I decided that I wanted to contribute to supporting community by helping people share their stories. Some members of MOC re-established a newsletter called the “The Motivator.” It was highly successful at capturing and delivering experiences of the members. The periodical gained acclaim and many sought to obtain one. There were problems, though ... many very petty. Leadership did not support the work, but we continued with our project.

Later, the publishing world changed; people were now starting to get their information from the Internet. We couldn’t sustain the publication, but we unknowingly were starting to do community development work.

We removed the project from MOC, put our own money into it, and started Kick Publishing Company. We were part of a new, national Black LGBT awareness era. There was a magazine in California, in New York state, and now in Michigan. All of a sudden, we became national publication.. The magazine did very well.

Next came the development of the Black, Gay Pride movement in 1995; I co-formed Hotter than July (HTJ) and the first event was held in 1996. We ultimately became the world’s 2nd oldest Black Gay Pride event in the world … stressing cultural development..

We developed “Kick” as a non-profit, and called it “Kick-The Agency for African-Americans.” The Black gay youth were doing a dance of that name in the 70s and 80s. It made sense to name it that in 1994. From 1994 through 2010 I did not have a salary. This was all volunteer.

From Part-time Activist to Full-Time Leader

When I moved back to Detroit, I had a full time day job even while I was developing and growing Kick. I was development director for AIDS Partnership Michigan when a unique opportunity presented itself. A national foundation gave us a huge two-year investment. Our board of directors decided to hire a full-time executive director. I recognized that many civic leaders are not paid to work in community. This position I now hold is very unique.

Soon after we moved to our 2nd office in 2011, it was time to create a Site Relocation Plan and to think about acquiring our new offices, which turned out to be a major development in our growth. It took four very difficult years during the age of the “New Detroit,” but now we are the only African-American, LGBT led nonprofit in the United States that owns its own commercial property.

I feel it’s important to share the leadership of the purchase, (LGBT President, developener, realtor, search committee) were African American LGBT AND allies. This blessed safe, brave space became a beacon where people could sense excellence as soon as guests arrive through our doors. At LGBT Detroit, our visitors can find support and resources to help them thrive … in a very healthy way.

This has been quite a learning experience for me. Although I may be solid in my gayness, many are not. I have to work with people who are not LGBT and questioning identity. I continue to learn to meet people who have resources willing to share; learn modern business best practices and learn new techniques on how to seek support. A lot of engagement and communication must continue to occur and try to figure out how to uplift each other.

Even though we are experiencing a lot of social change, homophobia and racism still exist. They haven’t gone away. LGBT people live in double discrimination. Even if I mask my sexual identity, I’m harassed for being black.

Leadership takes commitment, perseverance, and trust. With cooperation from the public and private sector; individuals and masses … we all succeed. Gamble and Huff wrote, “ We all have a mission to change the condition.” I believe that. We are all rooted in knowing that we belong to each other and we are one another’s keeper.