It was 2010… a frigid day in mid-January. After a long shift, I finally reached my driveway. As I pull in I see “her” car, a purple Monte Carlo. When I say “her” car; I am speaking of a woman by the name of Maureen (not her real name). A woman whom I loved and had a prior intimate relationship with. Everyone I knew, knew her as a part of me.

She stepped out of her Monte Carlo and stood in the driveway next to my opened car door. Her voice persistent as she  demanded the answers to what had become of our demise.

Maureen and I had dated on and off for many years and at one point we lived together, but at this particular point…. it was already a relationship that I had tried to end for years.

Her voice getting louder “Tell me…. well?  What was it.. LISTEN to me!”

Still talking she followed me inside.  Standing in the kitchen I recall saying “Just leave! I have nothing more to say.” I walked away. Seconds later, my hearing went out. Everything seemed slow and there was blood.

A lot of blood.

Red painted the sleeve of my white sweatshirt, and coated my hands…My arm suspended, paralyzed, unable to move.

I had been shot.

I don’t remember the bullet piercing through my skin. I just remember the amplification of silence, a temporary deafness; the taste of gun powder particles in my mouth.

Image is powerful. But as much as it is powerful, it can also be superficial… Many see the silver badge pinned to my chest, pressed and pleated polyesters and my duty weapon at my side. A layer beneath, a physique of muscularity and tattoos… I looked nothing like a “victim” and maybe that was why I wasn’t perceived as one.

Women can be violent and can be victimized by women. We know this, but we often don’t believe it. We are bound by social stigmas regarding men as aggressors, men overpowering women and that victims are vulnerable, weak and fragile. I’ve been a cop for 18 years, and I see how cops deal with same-sex violence.  Two men, “Well, that’s just a battery” break them up and send them on their ways. Two women, “That’s just a cat fight”.  Those are the assumptions made, I see it all the time. We minimize accountability, hostility and we minimize intentional criminal behaviors because of the stigma that women are viewed as the softer gentler gender. I was shot by the hand of a woman,  this was clearly aggressive domestic violence.   Whether we look strong or we look weak should have no bearing on our likelihood or ability to be or be viewed as  offenders or as victims.

Within months of meeting we were inseparable, there was a certain need to need each other.  She was much older than I was, and there was a mysteriousness in her eyes that I hadn’t seen before and it drew me in.  I knew from the beginning something in my veins told me to question the beginning of “us”. But I had ignored it. I found myself reciting her better qualities in a mere manner of self-convincement. She was successful, independent and was the kind of woman that could start and put out her own fires! I was drawn to her.

After living together for several months, I saw a different side, or better yet the only side. Her “Friday night side”. I didn’t always see her drinking, but the smell of alcohol on her breath, and on her lips seemed incessant. I would find half drunk or empty vodka bottles in her glove box, under the back wooden porch, and hidden in dog food bags. I don’t know if she hid those bottles or just drank so much that she had forgotten where she left them.

I didn’t consider Maureen a very violent person, certainly not the type of person who would shoot someone. But maybe just being a cop and with my exposure to personal and professional trauma and violence my threshold was just that low, and my boundaries just that skewed.

After being shot, I underwent extensive surgery for an injury medically termed as Brachial Plexus. Brachial Plexus Neuropathy (BPN), refers to damage to a single nerve or a set of nerves, specifically where nerves from the spinal cord branch into the arm nerves. What the doctors waited to tell me was the damage to my nervous system would be permanent; and due to the inability to fully use my right arm or hand to I likely could never be a cop or body build  again.

By the time I got home from the hospital most of the blood had been cleaned up in the kitchen, but my eyes like mini-blacklights seem to find its trace. In between the crevices of the hardwood flooring, in the decorative patterns of the cabinet knobs, resting in the scratches of the stainless-steel sink and imbedded in the porous granite stone countertops. Blood was all around me and if any of you have ever been exposed to large amounts of blood, well…you can smell it.  Trying to put the pieces together, I stared into the stainless-steel fridge where the Glock .357 left its mark. The big hole, right there in plain view. There was no wiping that off.

I didn’t hear from my agency. No phone calls, No get well cards, Nothing. It was like nothing happened but it wasn’t long before the incident hit the paper and the local media read “Lesbian Cop shot by her Lover”, and “Lesbian Love Triangle ends with Cop Shot “. I cant begin to tell you how messed up the incident had sounded when the media got a hold of it. Was I embarrassed? Absolutely. Could I see why my chief would be embarrassed? Absolutely. Why was the word lesbian used to target an audience? If I was straight woman would the media say “Straight woman cop shot by her boyfriend”? No, because it would have been assumed, instead the word lesbian was used to exploit my sexuality and make the seriousness of the shooting sound like a circus act.

I didn’t understand why the shooting wasn’t addressed initially. A transparency. Instead, an internal investigation ensued into allegations against me for “not living an exemplary lifestyle” and “bringing ill-repute” to the police department. I was in excruciating pain,  a victim of  domestic violence, yet I was being accused of this….Why? I didn’t want to believe that she could get away with shooting me, or that society didn’t view this as serious as a heterosexual act of domestic violence. But it appeared so.

While further reviewing police reports I learned she admitted to loading the gun while standing in my driveway, then shoving it in her waist band while waiting for me to get home.  She told officers she knew I wouldn’t want to talk to her and then told 3 inconsistent stories as to how the gun went off.  “She was showing me how to clean and take apart my gun”, “I was just trying to scare her,” “She shot herself on accident”.

The investigating officers and the SAO did not view the crime as domestic violence as there was no proof of a relationship.  They also said they could not prove she had the ‘intent to commit a crime” therefore it must have been an accident. They blew it off entirely. How was it our criminal justice system completely disregarded such violence. Was it because she was a woman? Because we were both women?  Or maybe because she didn’t look “masculine or butch enough?”  Or because she didn’t have a criminal history, because she was a middle aged white woman with a professional career; or maybe it was because I didn’t look like a feminine, vulnerable, victim.  After all I was a cop and I guess that alone makes me unable to be victimized.

There was no direct emulation or imitation of a heterosexual relationship, therefore they couldn’t visualize what this violence was. This contributed to lessening Maureen’s criminality and allowing my victimology to become almost non-existent.

The final decision by the court was a charge of Reckless Discharge of a Firearm, which would be the same offense as if I were cleaning my gun and it accidentally went off. Had it been viewed as domestic in nature, it would have increased these charges and the severity of the crime dramatically. The complaint as it was prepared, never indicated that I was shot or injured, it merely notes “a weapon was discharged in a dwelling where people are expected to be present”. This lack of justice was absolutely sickening, and devastating. 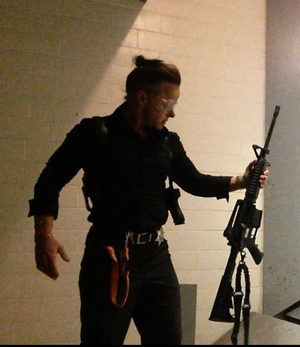 I filed a grievance and won, and was cleared from the internal investigation and placed on administrative leave pending medical discharge to full duty.  I taught myself to use my left arm defensively and tactic- fully. I forced myself to keep shooting, sometimes with tears of anger in my eyes as I numbed myself to that familiar sound of the firing pin.

Almost 6 months later, against all odds, I was medically released from my doctor and their doctor to return to full duty. I remember receiving that doctors note saying, “Cleared for Duty”. I was so proud of myself, but my employer rejected it. They claimed there was no way I could still physically do the job. I had to see specialist after specialist, fighting their resistance to return and fighting for my career, something that was going so well and then stolen from me twice, once by her and then by them.

Often I would stare into the hole of my wound, and the blackened stippling of burnt skin and  search for these answers.

I rebuilt my career and I eventually left that police agency and transferred to another.

Now almost 10 years later, when I step into that range for monthly qualifications, It is with instinct that I rely on my non-dominant side, and the smell of burnt cordite and that rapid displacement of air reminds me how close I could have come.

Although I despised the lack of efforts from law enforcement, I didn’t give up on the efforts of our criminal justice system. Instead I came back stronger and with a mission to increase awareness and improve police recognition and response to IPV in same-sex relationships.  Police officers need to be aware of the family dynamic differences in same-sex couples in order to identify intimate partner violence.  It is only when the criminal justice system understands the victimology and marginalities of same-sex intimate partner violence can this cultural shift can begin.

Being fearless is being honest and so I am able to speak this truth from a unique perspective; a lens of “within” and “against” a criminal justice system. I speak through my scars...the ones I wear, and the ones I won’t forget. I still remind myself I am lucky.