Glenn's View: Census 2020 is complicated for the LGBTQ Community, but it counts

By now, everyone should have received a mailing from the U.S. Census Bureau to get counted. I have complicated feelings about the census.

While the census is critically important to ensure a fair allocation of funding for services and political representation, it will not deliver the full acceptance and freedom of the lesbian, gay, bisexual, transgender and queer community. After all, it’s a government survey.  It will not capture the breadth of human experience in America today. So why are my feelings about it “ complicated?

It’s About Me and Who I Am

Some aspects of my identity are reflected in the census.  I’m gay.  There is no census question asking about sexual orientation.  Yet, the relationship question counts same-sex married spouses and unmarried partners. While being a same-sex couple is a poor proxy for sexual orientation,

I’m a dad of an adopted African American child.  Many LGBTQ people build families through adoption.  The census counts transracial families.  In fact, every year census data is used to allocate $8 Billion for foster care and adoption assistance that can help queers start families.

But It Doesn’t Reflect My Community

At the same time, my community is erased.  Trans and gender non-conforming people must respond to a binary sex question.  They must choose between their sex assigned at birth or how they identity today.  The census asks about biology, not identity, and today while Facebook has over 52 genders, the U.S. government only has 2.  It sucks.

Even India, Nepal, Pakistan, and Washington and Oregon states recognize a third gender.  I and my organization, the National Queer Asian Pacific Islander Alliance (NQAPIA) have urged the Census Bureau to recognize all of our community. 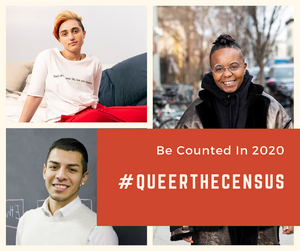 In the midst of the CO-VID 19 pandemic, health care is especially critical. The census is used to allocate $311 Billion in medical assistance annually, according to the George Washington University Institute for Public Policy.  More resources flow to where there is greater need based on the relative size of the population.

I teach a class on Asian American Queerness at Hunter College CUNY.  So many of my students benefit from the $29 Billion in financial aid (Pell Grants) for college every year.

I came out in the 1980s, at the height of the AIDS crisis. When I was in ACT UP, I fought hard to stop the spread of HIV/AIDS.  The census continues to be used to allocate $645 Million in HIV funding.

I could go on and recount the importance of an accurate census:

The more people who respond to the Census, the more likely resources will flow to under-resourced communities.

It’s About Political Power and Influence

Census data is also used to redraw Congressional, State Legislative and City Council district boundaries to make them equal in population. Sure, some districts can be gerrymandered.  But voting rights advocates can also use the data to draw districts that give communities of color, and those who have be traditionally underrepresented, a voice in the halls of power. 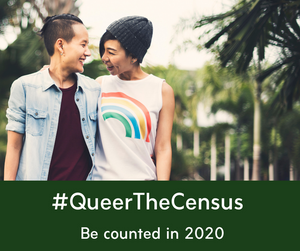 The census is required by law.  People can be fined $100 for not responding. Federal law also ensures that personal information is private and may not be shared with the immigration service, IRS, or law enforcement.

I am a lawyer.  I reviewed the law and was delighted to find that the confidentiality protections have been upheld and strengthened by the courts.  Yet, even in light of the strict penalties for those who violate the protections, I am still concerned.

NQAPIA is monitoring the census to keep our community safe. We have lawyers ready to sue if there are breaches and who are available to answer questions. You can report problems to us here.

The way I see it, getting LGBTQ people to participate in the census is ultimately about harm reduction.  The data collected is inherently under-represents the multiplicity of our identities. It can feel reductive and often dehumanizing, but it is necessary because of the very real implications towards how the government will allocate resources and representation. The census holds a lasting impact. To be missed is to be gone for the next ten years.